While professional football has always been popular, the last few decades have seen the sport rise to the most popular professional sport in the United States. As an entity, the NFL has become a multibillion dollar business. Teams are generating the revenues higher than ever before, especially form huge TV contracts, and player salaries continue to skyrocket. With all this happening, it’s understandable that the NFL stadiums are becoming architectural works of art.

Over the last 20 years, there have been 20, ultra-modern, hi-tech, glistening, stadiums, some of which cos upwards of a billion dollars. These massive, fan-friendly coliseum-like structures have retractable roofs, hybrid turfs, huge video screens, state-of-the-art lounges, even apps to tell you how long the bathroom lines are. And they also play football games there. Here is our list of favorites, in alphabetical order:

There aren’t many stadiums that can compete with Arrowhead’s game-day atmosphere. It starts with pregame tailgating that doesn’t get any better or friendlier, and continues with one of the loudest crowds in the NFL once the game starts.

While “Jerry’s World”, as it is commonly referred to, is an 80,000-seat football stadium, football almost seems secondary to the entertainment mecca that it has certainly become. 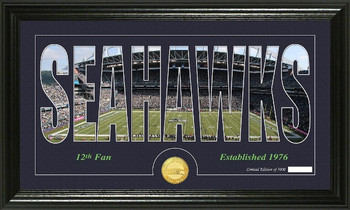 Notorious for its extremely loud and sometimes disorderly fans, the “12th Man” has set two Guinness World Records for having the highest decibel readings at an outdoor stadium. Its location, less than a mile from downtown Seattle, lends itself well as a multi-functional venue for concerts, trade shows, and other sporting events.

In addition to watching the game, fans have great views of the Allegheny River, downtown Pittsburgh, and of course, the giant Heinz ketchup bottles atop the stadium’s scoreboard. The Great Hall houses the team’s Hall of Fame.

Although it’s 60 years old, this iconic stadium has undergone a $140 million-dollar renovation that made it more modern and functional without affecting the integrity of this historic landmark.

Although it’s the home to the 49ers, the stadium is actually located in Santa Clara. It is the farthest distance of any NFL team from its home city, almost 40 miles from San Francisco. AS a multi-use facility, the stadium can be configured for concerts, motocross, conferences, and other community events.

“The Linc”, as it’s referred to by its fans and sportscasters, is also home to Temple University football, and has hosted the Army-Navy game on many occasions. Ten years after opening, the stadium underwent a $125 million-dollar upgrade, which included seating expansion, new sound system, HD video boards, and WiFi that can handle 45,000 users.

The only NFL stadium to be shared by two teams, it’s $1.6 billion-dollar construction cost makes it is the most expensive stadium ever built in the world. The venue can be changed from one team to the other in just a few hours.

The stadium was built on the south side of the block of the former RCA Dome, and is often referred to as “The House That Manning Built”, due to the success the team had while Peyton Manning was the quarterback.

This $1 billion plus stadium is truly one of the most beautiful venues ever built. It has something no other fixed-reef venue has, a translucent roof, that allows natural light to enter the stadium. And its main entrance of five pivoting glass doors is just one of its unique features.